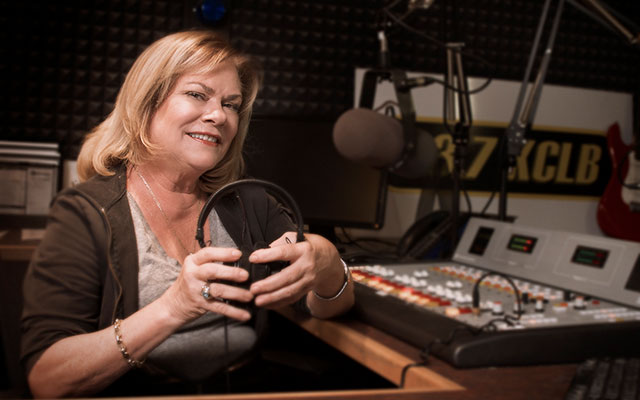 On-Air | 11am – 3pm
Shelly Dunn was raised in Oklahoma where she attended the University of Oklahoma (go Sooners!.)  She learned that you could volunteer at the college radio station and instead of money, they would pay in concert tickets…sometimes.  Being the music/concert lover she was, Shelly volunteered.  Soon, she was able to parlay that into a job at a ‘real’ radio station in Oklahoma City.  That station was Rock 100 The KATT.

That job led to a Dallas gig (go Cowboys!)

A stint at a couple of radio stations in Phoenix (go Cardinals!)

Then, finally, in 1990, she  moved to San Diego (go Chargers….right on up to LA if you keep playing this way!)

While in San DIego, Shelly got the pleasure of working with TK.  “Yes, there are stories!”  says Shelly.  “Just ask about a road trip to Malibu to see Matt Sorums’ house…Matt was not there!”

Shelly has had the pleasure of being part of a long time morning show in San Diego, Dave, Shelly and Chainsaw.

Now, through the magic of radio, she is thrilled to be working along side TK again, at KCLB.

“The desert is a long time love of mine and working in Palm Springs with this crew is a great joy to me!”

Shelly enjoys cooking, gardening, keeping bees and her chickens and of course, there is always a pup or two.  The newest member of the household is Mila, a pretty pittie who was rescued from Tijuana.

Shelly lives with her boyfriend, the retired Navy Commander Dean.  He loves to play golf while she pursues her hobbies.

“But what I enjoy the most, is great rock and working with a great and dedicated crew like these guys at KCLB!”

Listen to Shelly weekdays between 11 and 3….be ready to rock when you tune in!